Why Cross-Border Fund Domiciles are Transforming into Fund Management Hubs

Over the coming weeks, DMS will bring you its unique perspective on the challenges and opportunities presented to them as the European regulatory landscape shifts. The DMS Client Solutions Team tell you how they see it, on the ground, using their expertise and technical knowledge to assist clients in structuring their products with appropriate governance and compliance frameworks in place.

This four part series begins with “Why Cross-Border Fund Domiciles are Transforming into Fund Management Hubs”, as Daniel Forbes explores the post-Brexit regulatory landscape as large countries and small countries jockey for position to fill the void left by an increasingly isolated London. 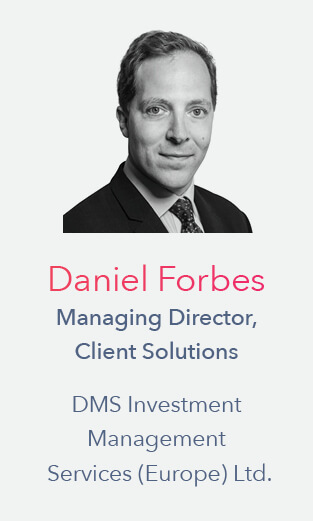 Cross border Fund Management is continuing to increase in complexity.

When I moved from legal practice to the DMS Client Solutions team in 2016, the main reason was the growing presence of the institutional Third Party Management Company as a key service provider within the European regulatory landscape.

At that time the AIFMD was still being digested by industry, with MiFID 2 on the way. These, amongst other, European regulatory initiatives sent a clear message to the Fund Management industry: Go Big or Go Home!

The impact of European-led initiatives is not limited to the European market. Common drivers are impacting on structuring requirements in all key fund domiciling jurisdictions, including Cayman, Ireland, Luxembourg and numerous British Overseas Territories, such as:

In conjunction with these supranational initiatives, Brexit is having a profound impact on the Fund Management industry, even before the UK formally withdraws from the EU on 1st Jan 2021.

With the FCA no longer having a significant sway on the direction of European Fund Management regulation the path is clear for the European Securities and Markets Association (“ESMA”) to promote a more Franco-German agenda. As part of this new direction we have seen increased pressure on British Overseas Territories such as Cayman / Bermuda / BVI / Isle of Man / Jersey / Guernsey which make up the bulk of the “offshore” alternative investment domiciling jurisdictions. The ESMA agenda is being felt far beyond the EU.

As an example of this shifting global landscape, the Cayman Islands was plunged into uncertainty when put on the EU list of non-cooperative tax jurisdictions (the “EU blacklist”) on 17th February 2020.

Cayman managed to successfully get off the list on 6th October 2020 after adopting reforms relating to its substantial private funds industry. These reforms were mandated by a combination of the EU and the OECD, manifesting in new registration and ongoing compliance obligations for over 12,000 Cayman domiciled Private funds via the “Private Funds Law, 2020” (“PFL”). This PFL initiative was an offshoot of the comprehensive economic substance legislation implemented on 1st January 2019, under which in-scope entities that carry on income generating activities (e.g. Fund Management) are required to demonstrate economic substance in Cayman.

The swift reaction of the Cayman industry to implement the PFL and register Private Funds within an EU-mandated six month window shows that the message from ESMA & the OECD was heard loud and clear: If you are a small country that relies on access to investors and financial market infrastructure based in larger countries, then non-compliance is not an option!

How does it impact Ireland & Luxembourg?

The ongoing political wrangling over the future direction of the EU is having a dramatic impact on the Fund Management landscape. When we speak to non-EU based industry participants the assumption appears to be that the pressure being applied on the British Overseas Territories is designed to push investment managers towards the established European cross-border fund domiciles of Ireland and Luxembourg. This assumption is incorrect.

Prior to the Brexit vote London was the unrivalled powerhouse of the European finance industry. With its convenient time zone, use of English and tradition of light regulations, the UK evolved as the world’s leading net exporter of financial services. It became the global hub for the full range of market participants, and the key launch pad into EMEA for Fund Management activities for non-EU managers with global ambitions. Although the UK, France & Germany were never entirely comfortable bedfellows, the benefits of the common market for the City of London far outweighed the perceived inconvenience of overreaching EU Regulation.

This relationship fundamentally changed on 23rd June 2016 when the UK veered off course from its position at the heart of the EU finance industry to becoming an outsider with “Third Country” status. As soon as the Brexit vote was passed the scramble to be the “new London” began in earnest. All of the main suitors to attract lucrative jobs and assets away from London – Paris, Frankfurt, Vienna, Amsterdam, Dublin, Luxembourg – had a good story to tell, but none of them could truly rival pre-Brexit London.

Yes, Ireland and Luxembourg have benefitted from the dripping exodus from London of Fund Management groups that require regulatory connectivity to the European market (i.e. passporting rights), but ESMA has not exactly encouraged this concentration of management functions in “smaller” countries. The battle for post-Brexit market share is being waged behind the scenes through pressure from ESMA on interpretation of existing regulation, with a particular focus on the thorny issue of “substance”

At the heart of the “substance” issue is so-called delegation, which allows an asset manager to set up a fund in one country, such as Ireland or Luxembourg, and carry out portfolio management in another location, such as the UK or the US. An estimated £1.7tn of European investor assets are managed from the UK.

What do Investment Managers need to know & do?

It is well established that Ireland and Luxembourg are long standing rivals to attract international groups to domicile funds in their respective jurisdictions for cross-border sale into the EU. Although both France and Germany have substantial domestic fund industries this is because the larger countries have more domestic managers that raise capital from their large pools of domestic investors via local funds.

If the aim is to raise capital cross-border then the established industry preference is to set up funds via a jurisdiction such as Ireland or Luxembourg that is specifically designed to accommodate international groups selling to multiple jurisdictions. There has been a 30 year industry arms race to carve this niche, and these two peripheral EU countries have been extremely successful at maximizing their access to the Common Market.

However, the success as a fund domicile jurisdiction has largely been predicated in the UK being the EU hub for cross border Fund Management. The combination of London (international hub for investment management) and Ireland/Luxembourg (international hubs for fund domiciling) was a very successful marriage of convenience.

Not only did this trifecta collaborate well on an industry level, but also on a regulatory level. With the FCA at the heart of this “pro-industry” bloc, Ireland and Luxembourg had the luxury of allowing their more powerful neighbour to interpret European Fund Regulation in a user-friendly manner. This was seen most notably upon implementation of the more controversial aspects of the AIFMD where the FCA released interpretive guidance which was largely followed by other like-minded jurisdictions.

The post-Brexit shakeup has presented opportunity and challenges for all global fund domiciling jurisdictions, with Ireland and Luxembourg closest to the epicentre. The key question is: How can a “Fund Domicile” transform itself into a “Substantive Fund Management Hub” in the course of 4 years?

Brexit means the UK is no longer the logical choice for a cross border European Fund Management Company. Compounding this challenge are the regulatory & taxation pressures on Fund Management functions being conducted within the same location as the Funds (or SPVs), and the increased demands of institutional investors for bespoke products across multiple jurisdictions. This perfect storm means that institutional Investment Managers are increasingly driven to outsource AIFM services to large specialty groups, in the same way as they have done for Administration, Depositary, Prime Broker, and other key service providers.

As we will explore in following articles in this series, the cost of compliance with ever-increasing substance requirements is prohibitive for most groups to launch their own proprietary Fund Management Company, thereby making the scalable, multi-jurisdictional Third Party ManCo the logical partner to navigate these uncertain waters.

This series continues with “Irish Fund Management Companies – time to take stock of Substance & Oversight” as Padraic Durkan explores the complexities of CP86 and explains how DMS broke with convention on what substance really means in oversight of Irish funds.

Changing Trends In Operational Due Diligence: How Are Allocators Reacting

This week, the Central Bank of Ireland issued its letter which laid out its findings, now that the fund management…
Read more
Archive

DMS Governance were delighted to have featured in Tipperary - The Place, The Time, where we were able to share…
Read more
Archive

Launch of The Limited Partnership Fund Regime in Hong Kong

This DMS Advisory reminds investment funds stakeholders of impending deadlines to be met, if they are contemplating formally closing a…
Read more

Looking for a fund?

Not sure what you are looking for?